Back to all posts

This week The Boxtones were asked to participate in Dubomedy’s version of The Royal Variety Show. Dubomedy is run by married couple Ali and Mina and they are the region’s Comedy celebrities popping up all over the place with creative new ventures and activations. They do lots of charity work too, so we were happy to take part in their Online Variety Show alongside so many amazing and varied performers including Luis Malabra – the winner of Spain’s got Talent who did an awesome job juggling like a madman. Also sharing the bill was Khalid Freeman, an amazing ‘Body Percussionist’ who has performed with ‘Cirque du Soleil’ and ‘Stomp’ and Orlene Gentile from America’s Got Talent who carried on the juggling theme (although this time with her feet). Lastly, fellow musicians Salha and Joel gave us some musical chops to keep our quarantined feet tapping! 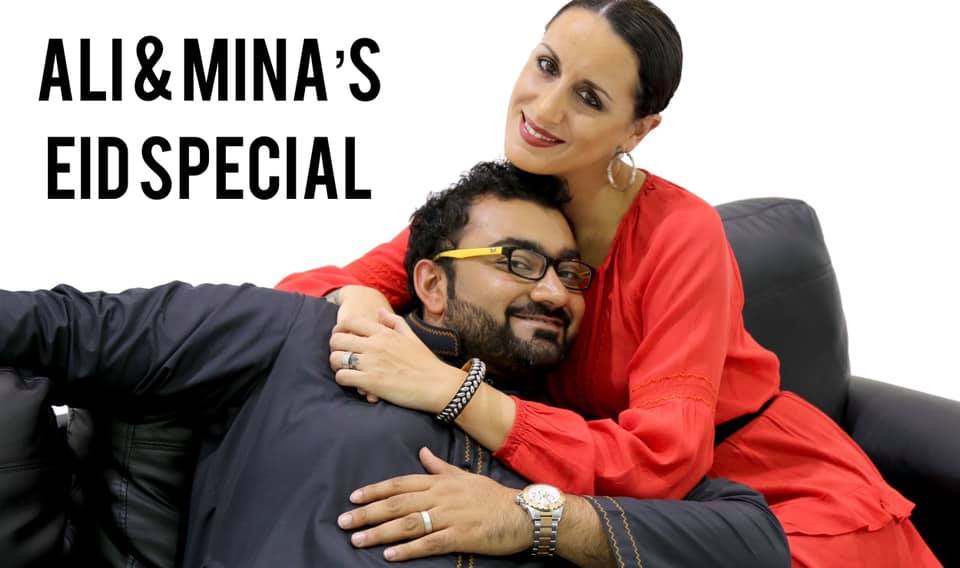 We decided we would do something a little out of the ordinary for The Boxtones and reanimated one of our old songs from way back in 2014. We gave this poppy rock original a lockdown makeover by completely changing its vibe and turning it in to a Jazzy swing sort of variation. Now we will be the first to admit it’s not our favourite style of music, but there’s something about this song that lends itself to the retro vibes of old jazz, so we threw a wing and a prayer and just went for it…costumes and all!

I have to admit I had a lot of fun recording this version. I am really not a big fan of Jazz or even this old song of ours but I enjoyed this more than I thought I would. I spent a few days listening to it and playing around with the arrangement, listening to jazz covers of popular songs for little inflections I liked and could maybe utilize and just getting an overall feel of how I was going to sing this song. 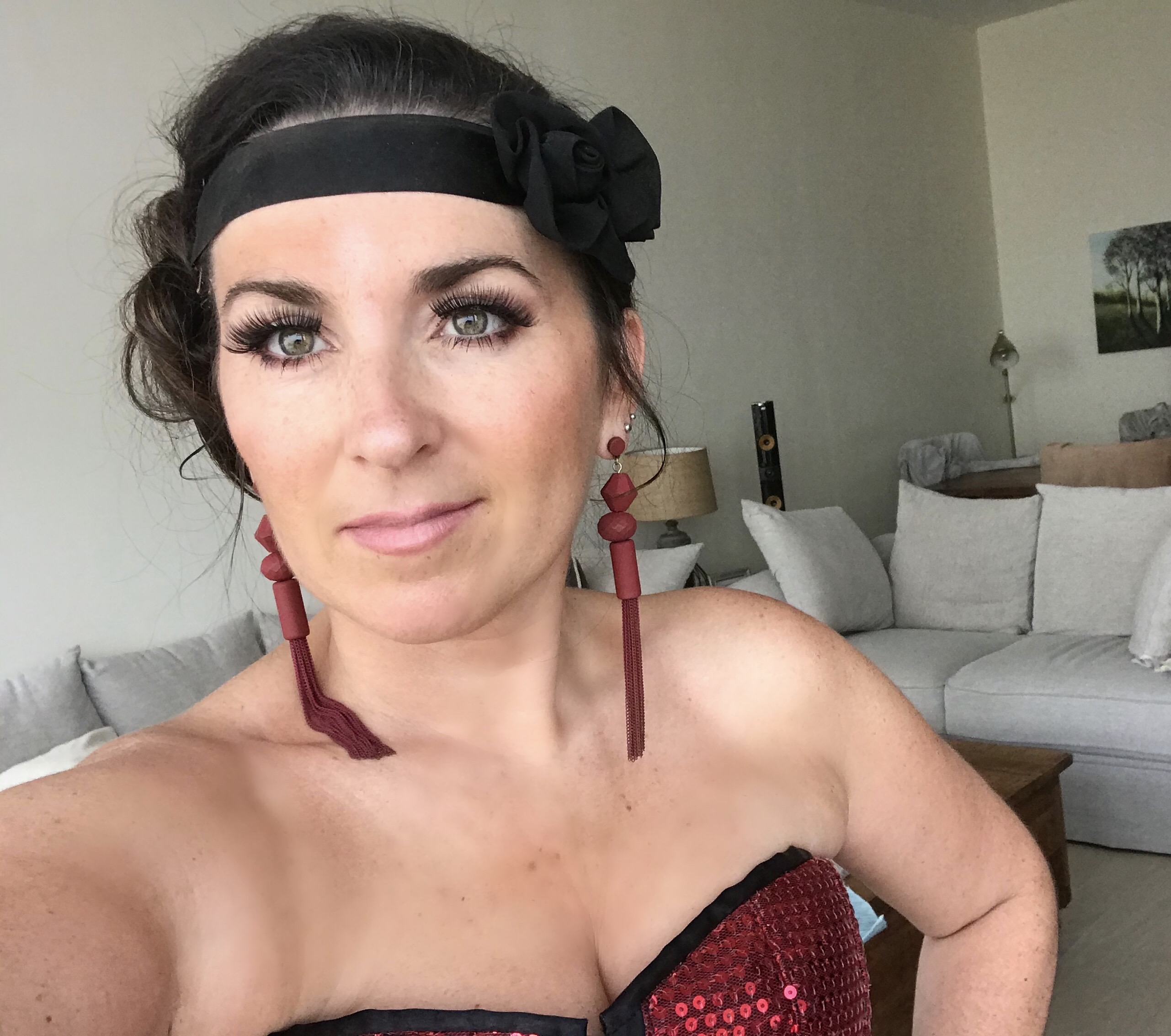 It definitely helped dressing up in my red sequined corset and some heels (man it’s been a while since my legs enjoyed that extra height). The dress up factor helped me to sashay around and get the feel for the jazzy musical vibes too. There’s always the fear of dropping in to full on cheese with Jazz but I embraced it wholeheartedly and found that I really liked the outcome and Gary created a really great and very professional looking homemade music video. So well done Mr Tierney, I tip my Jazzy hat to you!

“I’m not new to jazz it’s just been a while since I’ve tinkled the ivories in that style. Back in my teens, I was heavily involved with both Junior and Senior High Jazz bands at SCI (Springfield Collegiate Institute, if my old school chums are reading this). As well as accompanying a popular vocal jazz group, I attended Big Band Dances at the University of Manitoba (where my parents met while they worked on their education and music degrees). I also enrolled in summer jazz camps where I was mentored by a famous vibraphone player and composer Peter Appleyard. 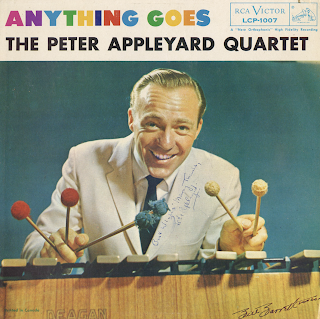 Fast forward 25 years and I’m back at it with The Boxtones!

It took some time to write brand new piano parts to an oldie of ours, but I am loving the final take! It also helps the experience be more enjoyable when working with professionals even if they aren’t ‘Jazzers’. Wonder what style we may tackle next? 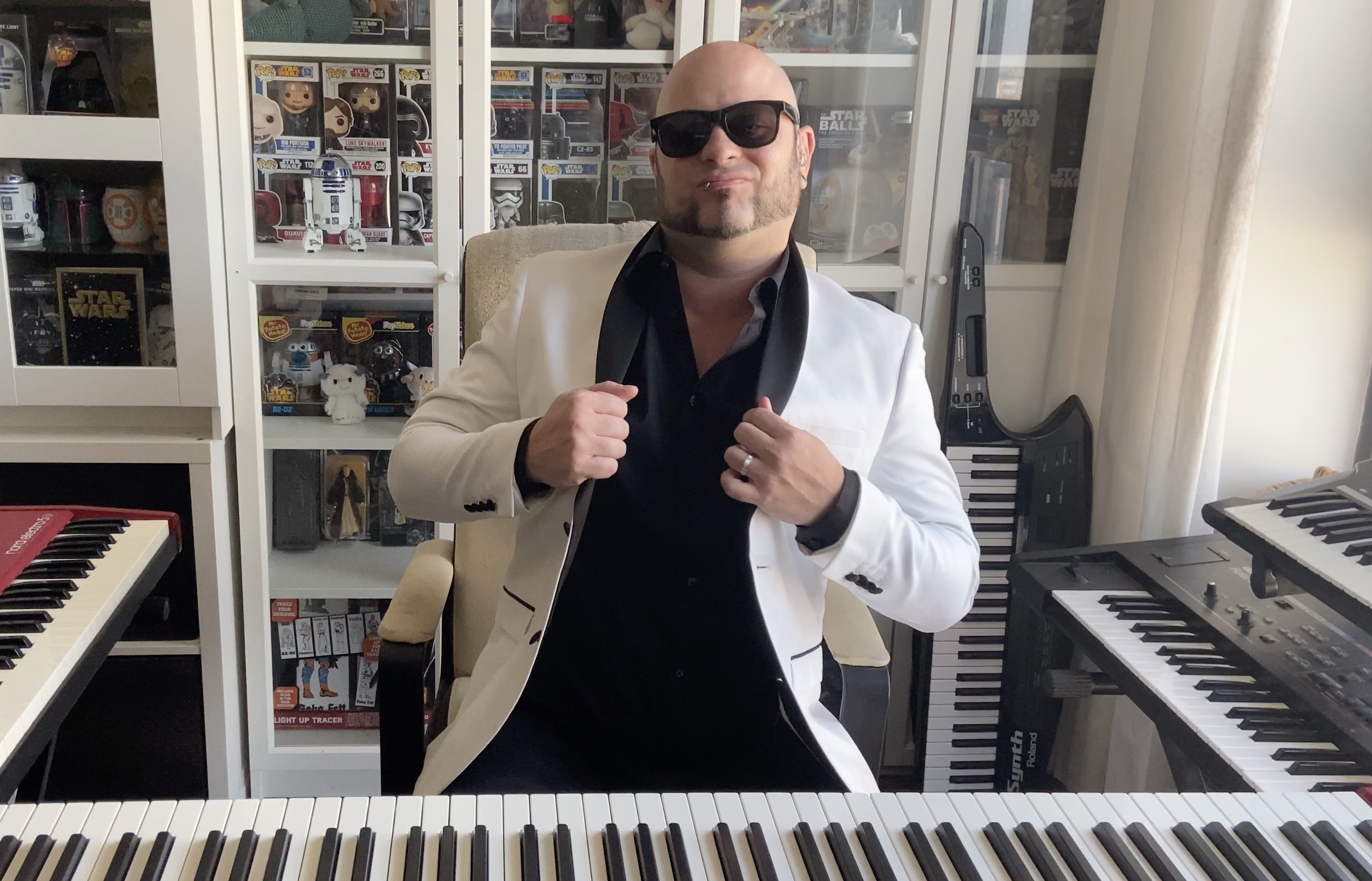 Oh and did you notice what I was wearing in the music video? It’s been referred to as my “Pitbull” look…not sure if that’s a good thing though. Back in my Rock Bottom Cafe days, I would be asked to sing/ rap as Pitbull with my previous band; shaved head, fine ass suits and wearing sunglasses indoors…DALÉ!”

“I have to be honest, Circusarium is not one of my favourite songs from our repertoire and jazzy swing is definitely not my cup of tea but that being said, this version of Circusarium really works and I love the final video. Getting dressed up in an evening gown and red lipstick in the middle of the afternoon during lockdown was something out of the ordinary that’s for sure! I’m happy to be getting to grips with recording drums at home and and I’m looking forward to the next set of videos.”

“I was a little intimidated when I first listened to the track with guitar and drums. I remember Gary saying when we were all talking over Zoom, “I know how you love those walking bass lines Jean” with a chuckle after. It’s true, I have had nothing but a problem playing other jazzy tunes, but this song would prove to be the exception. I took the original bass lines and literally jazzed it up by adding notes and even spicing up the chorus a bit. It was really fun writing those lines, and I was really proud of myself afterwards. 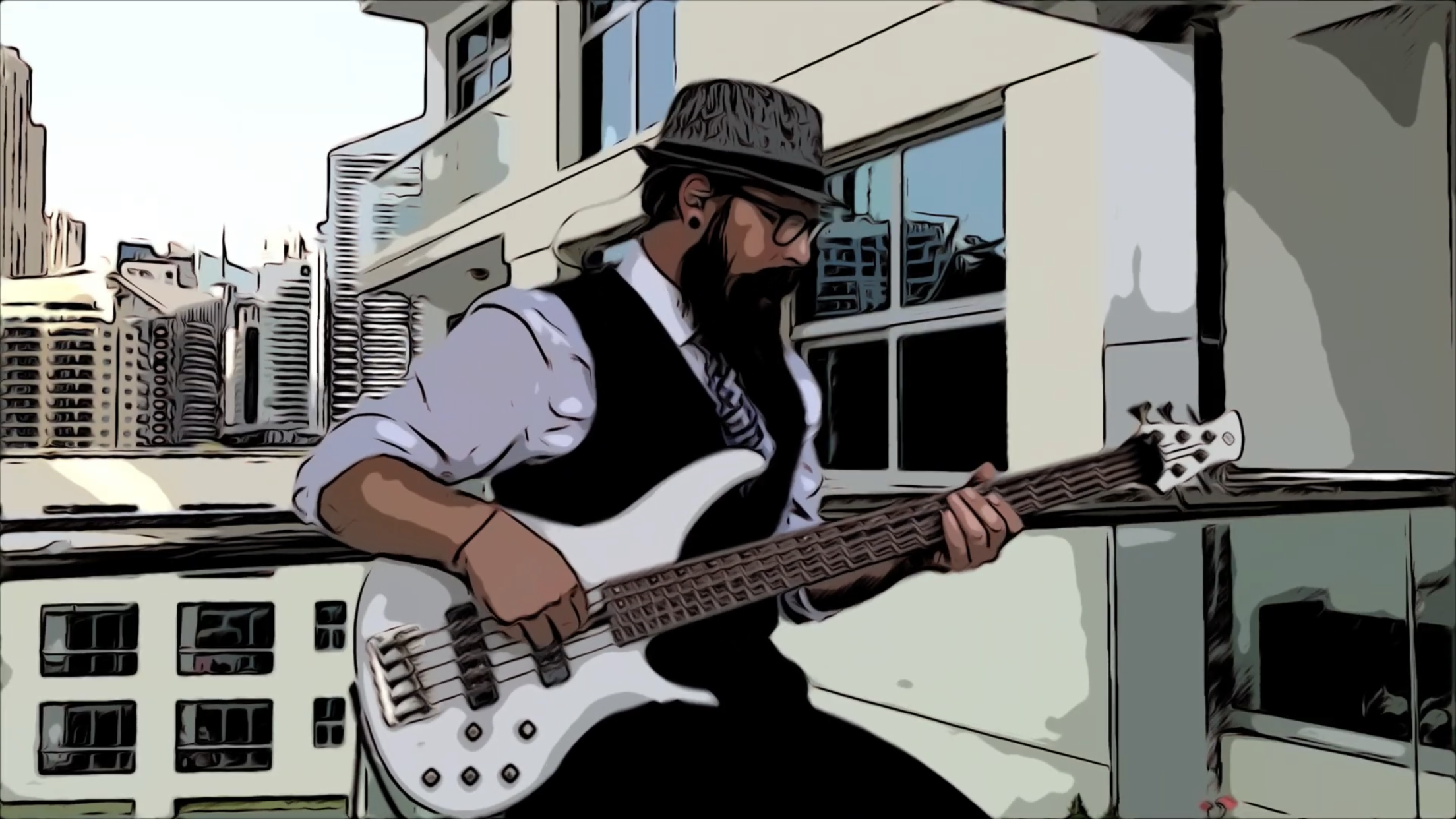 Videoing it on the other hand, haha, that was not so much fun, I spent around 8 hours (or more) in total on it. Like a lot of us I’m a perfectionist, and well, anytime I would mess up one note “NOPE, redo it.” All in all, the experience was great and I am really happy with the final product.”

“Apart from performing on the project, I edited the master mix, edited the footage and created the video. I don’t really like tooting my own trumpet but I’ve had a lot of experience working as a sound engineer and a creator of music videos, so it was pretty straight forward for me to put this together. 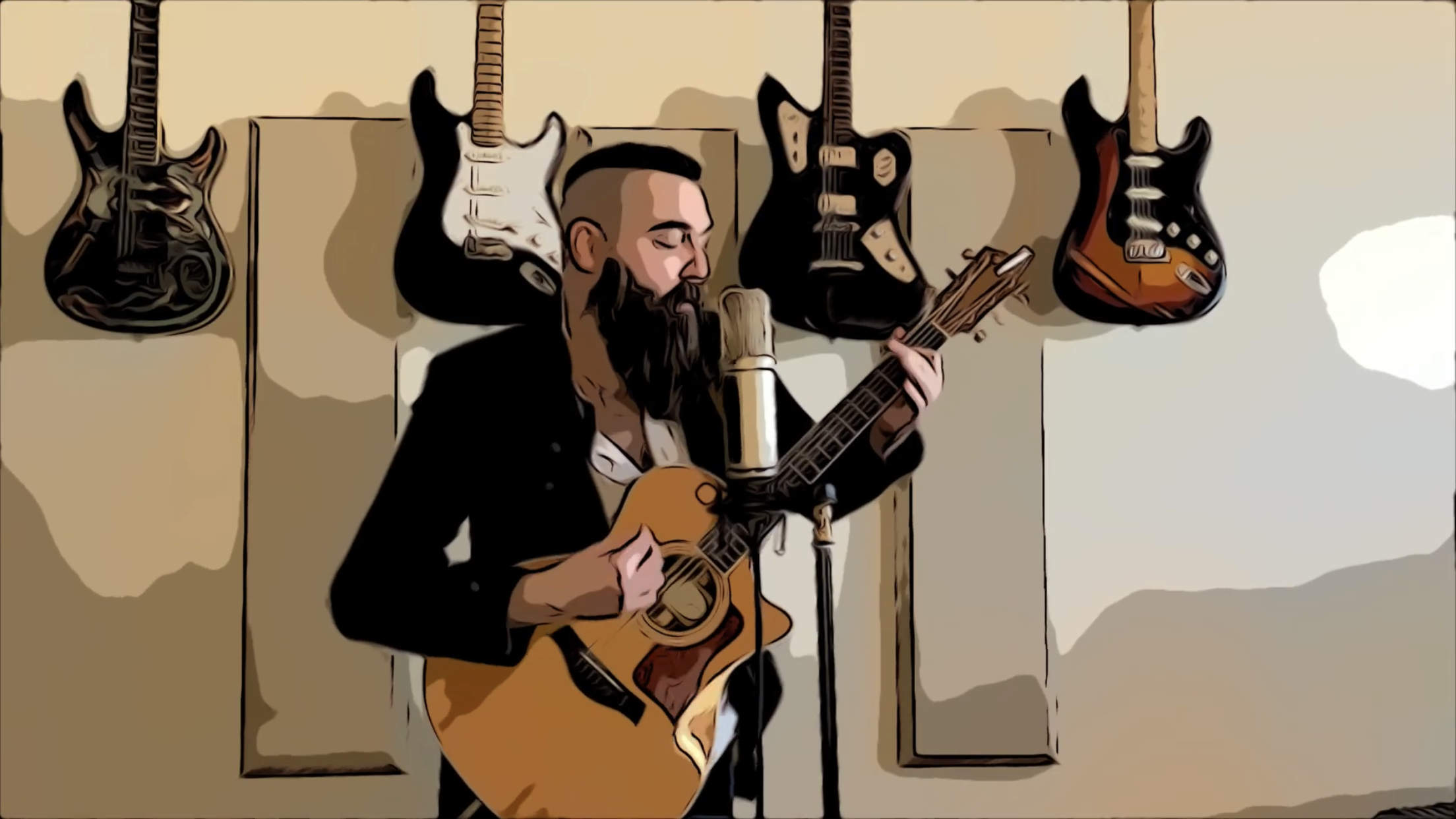 The basics of it are, I have a hand in the full process of getting these videos made. The steps I usually take are:

Artwork for the track along with the original music video.

Release platform and funding for the track.

Running a business to sustain economic and artistic growth for The Boxtones over 10 years.

Re-writing and tracking for a jazz/big band feel for an isolation release.

Recording, editing, mixing and mastering the audio content recorded by all of the band.

Editing, compiling, filtering, de-noising and color grading the video work done by all the band and creating a Master music video.

Collaborating with our social media manager and setting up the release.

It’s a lot, and that’s not even the half of it, but in the end a 4 minute music video was made, and I hope that people enjoy it!” 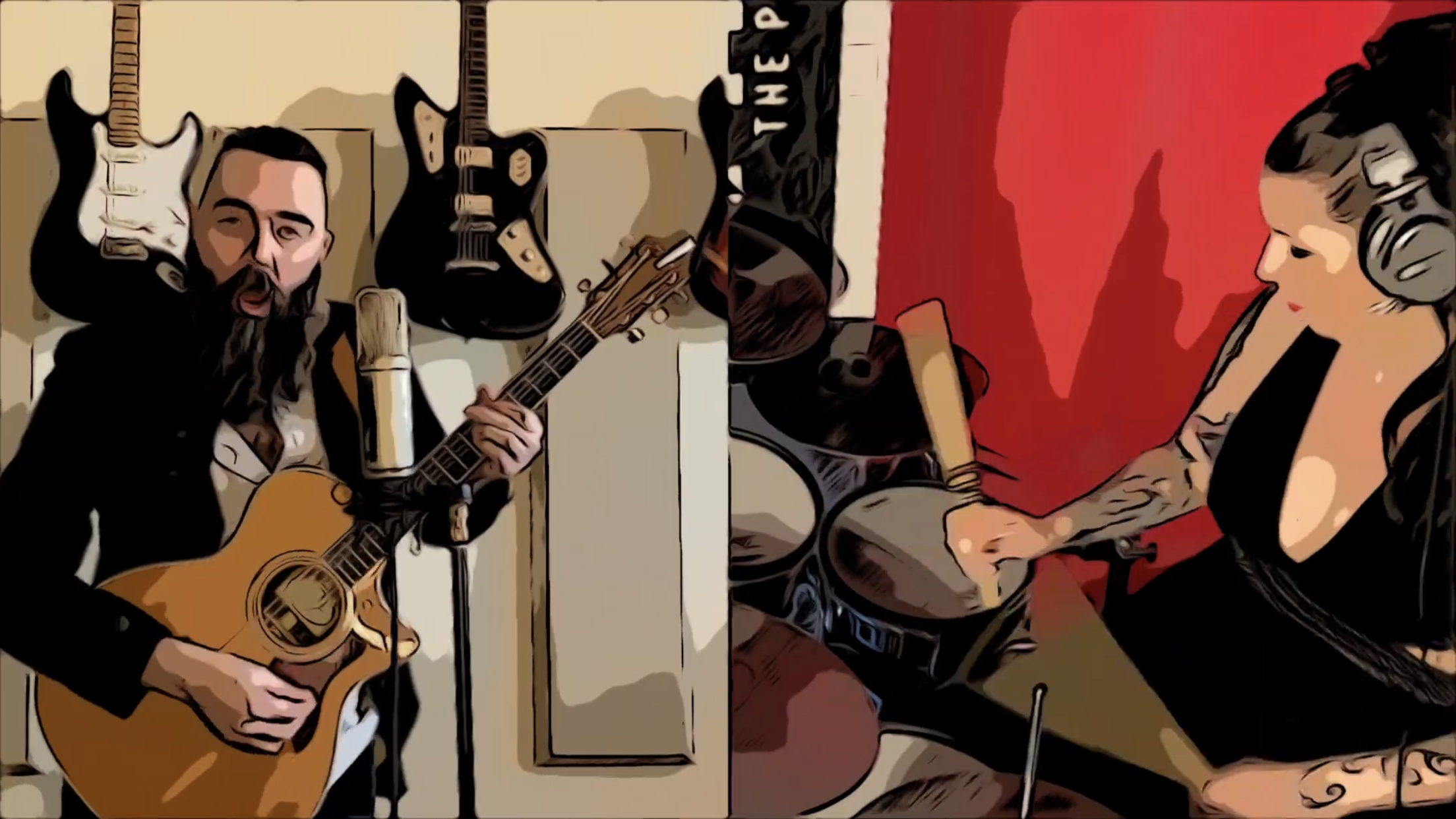 So if you have yet to see our Jazzy rendition of “Circusarium” then pop over to our YouTube Channel, pop on some heels or a shmancey jacket, pour some bubbles and check it out!

Keep your eyes at the ready for our weekly isolation videos as we have a whole bunch more to come over the next few weeks!